Doing a search for Aphodite brings back over 29 million results. Isn't that Astonishing!!

When you look at the results, not only does it include Greek mythology but many other surprising things which use the name Aphrodite.

According to Greek mythology, Aphrodite rose from the Mediterranean sea not far from Paphos which nowadays is one of the most popular resorts in Cyprus.

Every year millions flock to Paphos to see all the amazing historical sites. Including Aphrodites birth place, baths, temple and other stunning archaeological sites.

We have visited Aphrodite's birth place many times over the years. Everytime, we find the scenery breathtaking.

There is a pebble beach where many people go to enjoy the view, take photos and swim around aphrodites rock which according to mythology will bring you luck. We have'nt tried it. Let me know if you have. 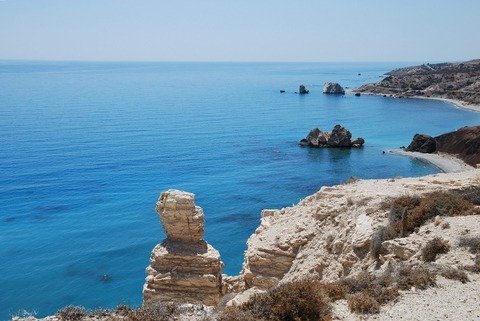 On the main Limassol to Paphos road.

You can park across the road and enjoy the view from a height or walk down to sea level for a closer look, soak up the atmosphere and a few rays!

Who was she exactly?

There are a lot of stories about Aphrodite and her colourful adventures.

The amazing beauty of Aphrodite Goddess of love was unequalled.

Wooed and worshipped by men across all religions and has had many evolutions that spread throughout countless cultures in the whole history of the human race.

Who were the men in her life?

Aphrodite was a very busy lady when it came to men. She had many affairs in and out of married life.

Some affairs were pretty serious, odd, funny and some had tragic consequences.

Top 10 Men in Aphrodite's Life outside of Marriage

Aphrodite had many children out of wedlock. But, most interestingly she never had any with her husband Hephaestus. Very sad indeed!

Here are some of Aphrodite's children she had with her lovers.

So there you have it... Beautiful Aphrodite Greek goddess of love is a very interesting goddess to read about. No wonder so many people are interested in her life. She had a very busy time, don't you think?

You can learn more about the birth of Aphrodite here